Caught in a Hit and Run 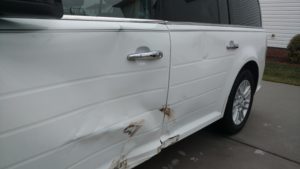 Caught in a Hit and Run

This story ends well—well, better than a story about a hit and run might normally end.  Let me tell you what happened…

It was 6:00 on Friday.  I was on the way to meet Stephen, my husband, for our date night dinner at Outback Steakhouse.  Everything was going as planned.  Then, in a matter of seconds…

Hit and run!  Is this happening?!  Did that person really just drive off?

That’s what I was thinking as I pulled my car off onto the side of the road.  I had been hit, knew at least one other car was involved, and suspected that a third car just sped by and up the nearest exit ramp.

I called 911 and, with a shaky sad/mad voice, asked for help.  As I waited for the police, I sat thinking about how much this was all going to cost and how I was grateful I wasn’t physically hurt.

I was also thinking, “I should have listened.”  As a Christian, I believe God speaks to me through the Holy Spirit—not literal, audible sound, but through thoughts and instincts.  Just before I had gotten on that particular highway (Highway 52 for those of you who live in the Winston-Salem, NC area), I thought, “Maybe I shouldn’t go 52.”  Seeing that traffic didn’t look too bad, I went ahead and got on 52 only to be caught in a hit and run just seconds later.

I’m also a realist, and so sad/mad as I was—about my car and about not listening to God—I knew, “It is what it is.  I can’t do anything about it now.”  I explained to the officer (Corporal Mattison) that I believed a third car was involved.  After he and a couple other officers investigated the damage, he agreed this had been a hit and run.

Corporal Mattison eventually cleared me and the other driver to leave, informing us both that there was nothing we could have done to avoid the accident.  He told me that he would call me if any additional information turned up, but at that point, they had little hope that the hit and run driver would show up.

Hit and run!  As I drove away, I started thinking about the possibilities…maybe the hit and run driver was scared, maybe he or she was just a “bad person” who would have to live with what they had done, maybe they didn’t even care, etc.  I prayed, asking God to help me see what I could learn from this accident.  I also asked Him to work in the hit and run driver’s heart and mind, that he or she would do the right thing.  But, I’ll be honest, I didn’t expect what happened next.

Corporal Mattison called me a few hours later and said he had good news!  The hit and run driver had called to turn himself in.  What?!  Tears again came, this time because of my gratefulness, for my disbelief, for my relief…yes!  And, more than anything, my tears were about my overwhelming sense that God was saying to me, “I heard you.  Let me get this for you.”

I thanked Corporal Mattison several times because he was amazing!  He was not only considerate and professional on the side of the road, but he remembered me and the other victim and wanted to personally call us both to let us know what had happened.  He shared that the hit and run driver confessed to being in an argument with someone in his car and did not see me and the other driver until it was too late.

I feel bad for all three of us—the hit and run driver, the other victim, and myself.  Car accidents are a lot of expense and trouble.  But, wow, crazy as it sounds…I’m not sad/mad anymore about being caught in a hit and run.  Mainly because God showed me so much through this whole ordeal.  Above all, He showed me once again that He is listening, and He cares.

Some of you who know me well may be wondering…well, did you go on and eat dinner?  Yes…just not at Outback because we didn’t have time.  Another day for sure!

And others of you who know me really well are probably wondering…I wrote about “hit and run” but didn’t mention Paula Abdul’s song “Straight Up!”  You know… “or am I just caught in a hit and run?”  Yes, I absolutely thought about that!! 🙂

God bless y’all for your friendship and for reading this!  Be safe driving!  And, if God is talking to you, you might want to pay attention.  He has important stuff to say! 🙂

If you have heard from God lately and want to share about it, consider leaving a comment in the comments section below (scroll down just a bit).  I’ll do my best to get your comment posted as soon as I can.  I’d love to hear from you!

Sign up to receive my blog by email.  You’ll find that sign-up at the top of my blog page.

About the Author: Shannon Warden

This site uses Akismet to reduce spam. Learn how your comment data is processed.