Tired enough to change. You’ve likely experienced that before.

Perhaps, as a super simple example, you tired of the service at a store or restaurant. You decided, “that’s it! I’m not going back.”

In cases like this, people reach their “breaking point,” and what do we do? We change!

However, change isn’t always so easy. For starters, we sometimes don’t recognize that we’re tired. We may feel unhappy, but we hope whatever it is that’s making us unhappy will somehow improve over time or otherwise become more bearable. We choose to press on—same old, same old.

Other times, we know we’re tired; we just aren’t tired enough to change. That is, we’re not stressed out enough or overwhelmed, angry, or depressed enough. Here again, no change, and thus, same results—we stay stuck.

In January 2019, I knew two areas of my life needed to change, but I had no real plan to change. I still had a “maybe one day” mindset.

Fast forward to March. I had a distinct and powerful moment of spiritual clarity in early March that set into motion my August departure from Wake Forest University. After six years on faculty in the Department of Counseling, I was ready for change. Unexpectedly, God moved me to a much smaller nearby university (Piedmont International University) to help build its counseling program. This has not been an easy change in some ways, but change is like that at times. We have to be willing to step out in faith, believing that the process of change will ultimately be rewarding.

A second major change also began happening in August—I was finally ready to prioritize my physical health. Previously, although I wanted to prioritize my health, I was not tired enough to change. By August 2019, after years of “hoping to” change, I finally not only took initial steps but actually committed to a sustainable lifestyle change. I went from hoping to change, to tired enough to change, to changing, to changed. And, as Michael Buble sings, “I’m feeling good!”

You and I both have goals for 2020. The year, though, doesn’t really matter. The real question you and I have to answer is this: are we tired enough to change? That moment of being “tired enough” may or may not happen in 2020. Rather than over-expecting or over-planning for the new year, I believe we’ll be better served spending quality time with ourselves, thinking deeply about what it is we really want in life. We might even allow ourselves to dream a little, or imagine what change may look and feel like.

In addition to considering the possibility of change and imagining desired outcomes, I’m going to pray more specifically about change. God knows in what areas of life I’m tired enough to change. He knows my fears related to change. And, He knows what I’m capable of in terms of change. So, it makes sense to me that I spend more time talking with Him about the master plan for optimal change.

Other strategies when you’re tired enough to change

You already know some things about how to change. Hopefully, you’re picking up a few new thoughts or a little extra inspiration by reading my post. Along with the few strategies I’ve touched on above, I also want to share with you a couple other relevant thoughts.

I am a long-time fan of Wake Forest sports (Go Deacs!), but I also love Clemson football, largely because I admire Coach Dabo Swinney’s spiritedness and his boldness to love Jesus publicly. After Clemson’s amazing win over Ohio State, one of Clemson’s many talented players, Isaiah Simmons said something like the following in an interview: “Coach Swinney says it’s only ‘unthinkable’ if you never think it.”

You and I often don’t allow ourselves to think about change. Instead, we somehow believe it’s not possible or will never happen. The latter is truer—change won’t happen if we don’t think it can and then take the steps we can take to achieve that change. Clemson football didn’t become great overnight; many factors working together over time made Clemson successful. Thinking about and envisioning success can work for you and me, too.

A second thought I want to share is one that was recently shared on my church, Triad Baptist Church’s social media: “You’re busy begging God to change your situation, when God is busy trying to change you.” That puts a different spin on change. As we consider, imagine, and pray about change, let’s also keep in mind the big picture. That is, what is God doing in our life? As far as I understand God, I don’t see Him trying to change us for the worse; He’s changing us for the better. Like Paul says in Philippians 1:6, “For I am confident of this very thing, that He who began a good work in you will perfect it until the day of Christ Jesus.”

I hope this post resonates with you in helpful ways. I’m praying for you as I post this to my website (www.shannonwarden.com) in hopes that you soon make a change you are tired enough to make! God bless you and keep you as you move into and through 2020! 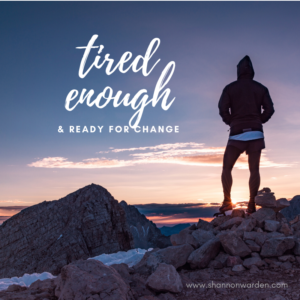 Tired enough to change. That’s an exciting place to be because it signals the possibility for positive change. Read for encouragement. www.shannonwarden.com

About the Author: Shannon Warden

This site uses Akismet to reduce spam. Learn how your comment data is processed.